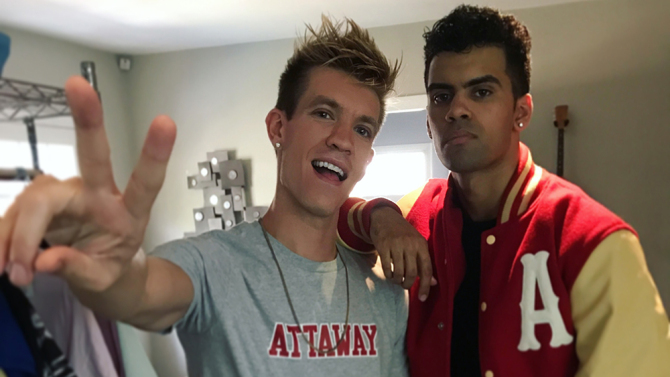 For its lineup of fall series, Brat took over a high school near Pasadena, Calif., and filmed a slate of overlapping shows set in the same fictional high school. In the “Attaway High” universe, characters cross over between various productions in order to foster an environment that approximates a typical American high school. The company teamed with talent manager Matt Dugan and digital production house One Push Digital Creative.

“With our fall slate, we’re creating iconic stories and characters for this generation of viewers,” said production chief Asher Levin. “We’re bringing back the honest, irreverent and sexy programming that resonated with young audiences in the ’80s and ’90s.”

“Turnt” is a teen soap about romance in the age of Snapchat and stars Byrne, Oliveras (TV’s “Wildnout”), model Elsie Hewitt, and Nate Wyatt. The show is written by Rachel Stern and directed by Will Slocombe (“The Escort”).

“Chicken Girls” is a coming-of-age story starring YouTube collaborators Summerall and LeBlanc. The ensemble story follows a group of dancers known by their pet name, the Chicken Girls. The show is written by Janey Feingold and directed by Ethan Dawes.

“Flunky’s Upset” is a political satire centered on the student government, starring McCarthy with an ensemble cast including Musical.ly performer and trans activist Raegan Beast, and YouTubers Chandler Alexis and Denzel Dion. “Upset” is written by Meg Favreau and directed by Jeff Jenkins.

HAYDEN AND DYLAN SUMMERALL STAR IN NEW SERIES ‘KEYS’ TOGETHER